The Royal Road to Golmud

The southern Silk Road route from Kashgar to Golmud, skirting the Tamaklan Desert, took me five days to complete. I dare say, with better planning it could possibly be done in four, though the total effect would be even rougher, substituting a day on bus for a day of recuperation.
This route is more of an experience than a series of gratuitous photo opportunities, so I have relatively little to show for myself.
This first picture is of a standard monument, which figures in at least two of the Southern Silk Road towns. It shows Chairman Mao shaking hands with a Uighur elder. Note the height difference between the two. Mao in real life was not a very tall fellow, yet here he is, looking down on his minority ward! 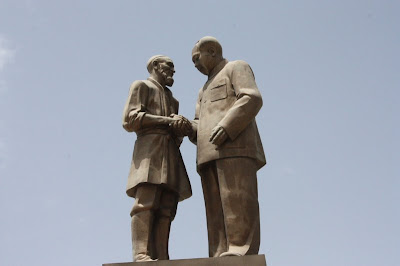 This may have been the third day. I don't remember. There was some engine trouble with the bus. This man was my well-natured seat-neighbor. The scenery here is dramatic compared to most of it! 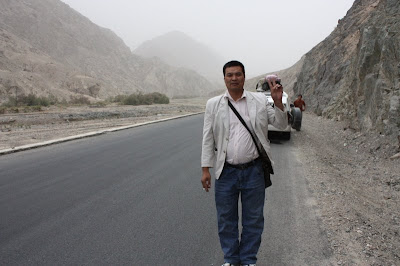 I nominate this building as the worst piece of architecture in China, if not the world. It was in Huatugou, where I received a massive police shake down on the sidewalk for ... being foreign. I sincerely hope that I never see Huatugou again. 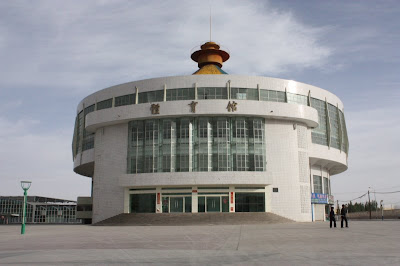