A Foray to the DPRK-China Border


As a North Korea junkie, one of my favorite trips is to the China-North Korea border. The easiest spot to get a glimpse of North Korea is from the Chinese city of Dandong. Across the Yalu River (Amnok River to Koreans) one can glimpse the North Korean city of Sinuiju, rather dwarfed by Dandong, which has been growing steadily, while Sinuiju seems to be cryogenically (and economically) frozen in time.
Near the Tiger Mountain Great Wall (the easternmost strip of Chinese Great Wall, incidentally), a walking path skirts a tiny branch of the Yalu River. Here is probably the narrowest separation between the two countries.
On the day I visited, the air was a bit smoggy, and the fields are still covered with dry stubble. This was certainly not the tourist season, though, and it was only me and a crowd of ragged North Koreans hanging out around the fence on the other side. One man was paddling a strange mini boat contraption back and forth along the North Korean shore.
About a week after my visit two US journalists were detained for either a.) continuing to film and take photos after North Korean border guards had ordered them to stop, or b.) crossing too close to/into the North Korean side. (see http://www.koreaherald.co.kr/archives/result_contents.asp) 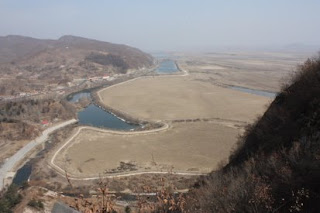 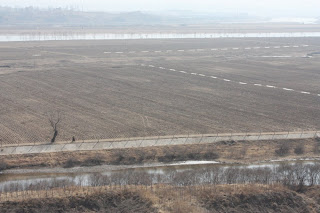 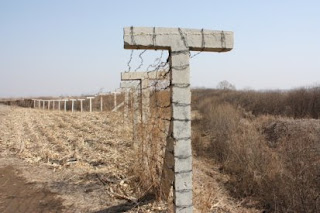 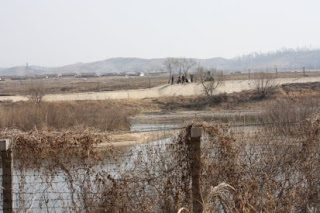 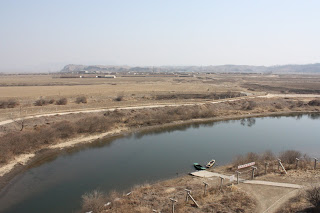