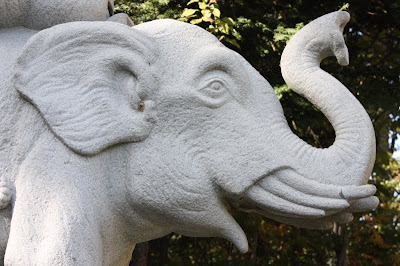 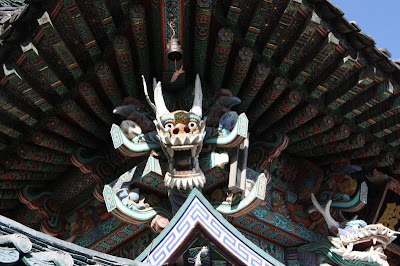 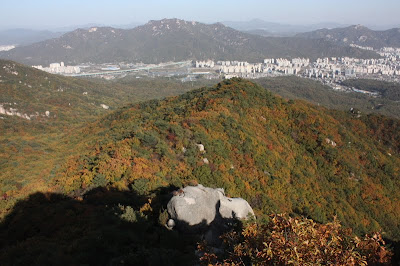 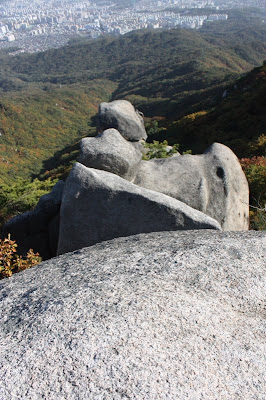 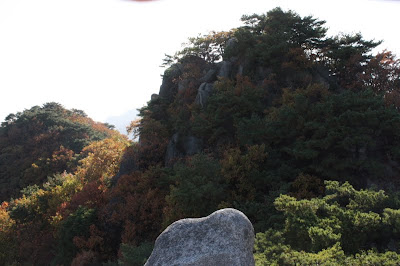 After Nam-san, Bugak-san is arguably the most conspicuous mountain in or around the downtown Seoul area. Every pedestrian heading north on Sejeong Road, toward Gyeongbok Palace and the presidential Blue House, is facing the bald, streaked crown of Bugak-san.

I tried to hike Bugak-san during the last period when I was living in Seoul. Not knowing that the mountain was closed off to the public and patrolled vigrously by heavily armed soldiers, I had to beat a hasty retreat.

In 2006, however, the mountain was opened up to hikers, who may now follow a strict course along a rebuilt fortified wall. The gates close at 3 pm and all visitors must bring an identification card (or passport) for signing in.

Here is Sukjeongmun (Sukjeong Gate), the most northerly of the gates of Seoul's old wall. 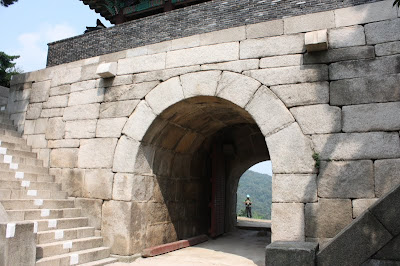 There are ten semi-wild deer living on Bugaksan. After years of hiking remoter Korean peaks without spotting a deer, I never would have expected to see three at the same time within the Seoul city limits. 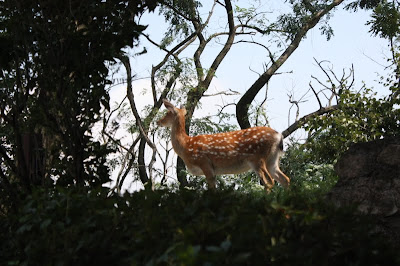 This is the statue marking the reason why Bugaksan was closed off to the public. Police Chief Choi Gyu-sik was the one who led an attack on a band of North Korean guerillas who had made it into the south. They were well on their way to the Blue House to assisinate President Park Chun-hee. 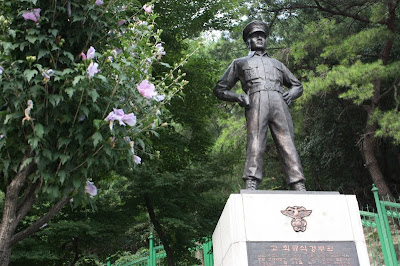 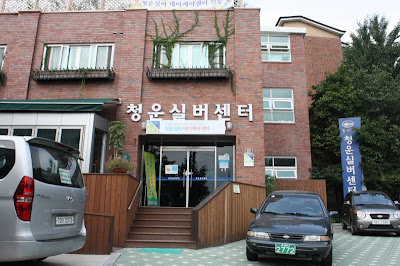 One of the many fine views of Sam-cheong-gak, a former kisaeng (courtesan) mansion for top-level government business. These days it functions as a restaurant-teahouse. 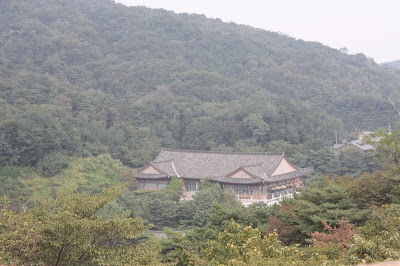 Posted by Almayer at 9:36 PM No comments: 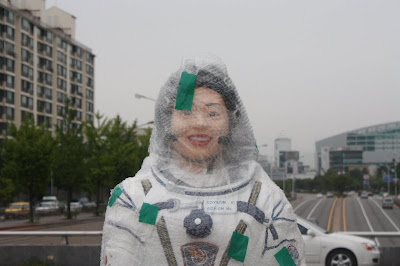 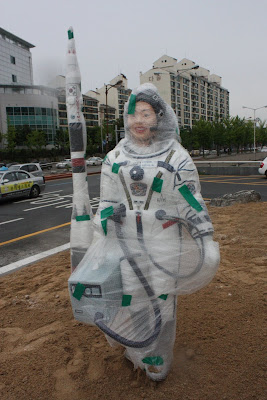 Posted by Almayer at 2:01 AM No comments:

The Berlin Wall - In Seoul

I came across this section ofthe Berlin Wall during my recent ramblings around Seoul. The wall segment was presented as a gift from the mayor of Berlin. The Cold War separation of the Korean peninsual into a North and a South is often compared to the division of Eastern and Western Germany. Though there are a great number of differences between the two cases, guidence for Korea's future is sometimes sought through analysis of the successful reunification of Germany. 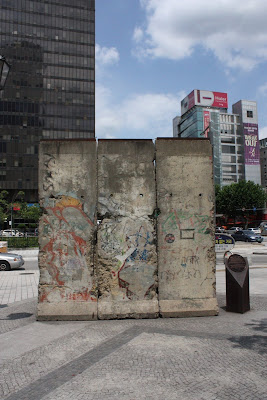 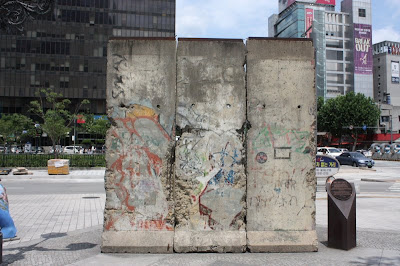 Now that you have passed a solemn moment of reflection, I urge you to indulge in some '80s nostaliga by watching this video of David Hasselhoff singing on the Berlin Wall. Check out his lit-up jacket.
http://www.youtube.com/watch?v=0zXiClnK8oE
Posted by Almayer at 7:29 PM No comments:

Not far from Seoul Station is an interesting looking dog meat soup (보신탕) restaurant. The middle character, 신, has been substituted for by a pair of old-time rubber shoes (고무신), making a witty play on words. 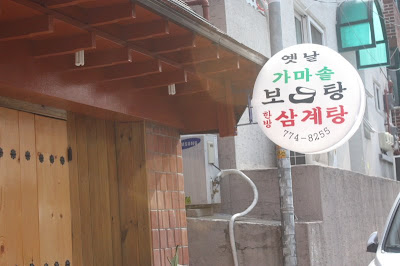 Posted by Almayer at 7:24 PM No comments: 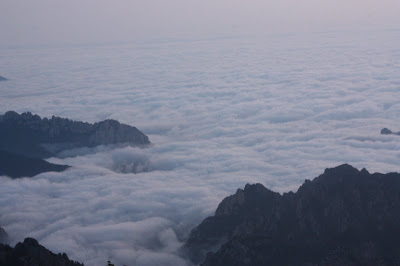 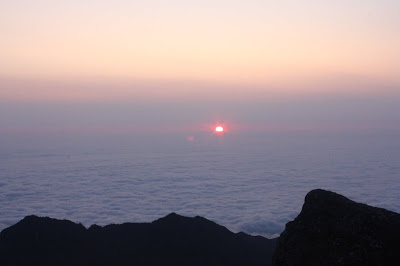 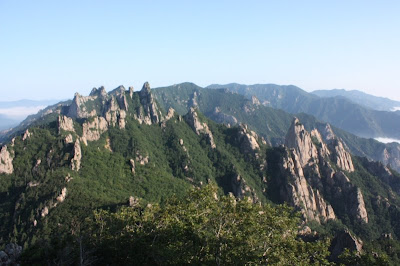 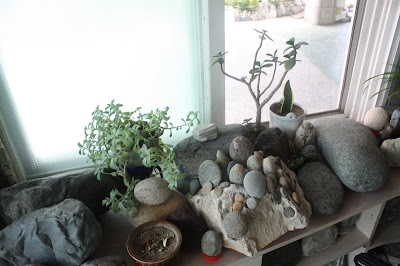 The Sari Pagoda, on a rock ledge above Bong-jeong-am. Sari is a Korean Buddhist term for the white rocks that are found in the cremated ashes of enlightened monks. The sari are said to form in the brain, and are considered holy relics, to be enshrined within pagodas or stupas. 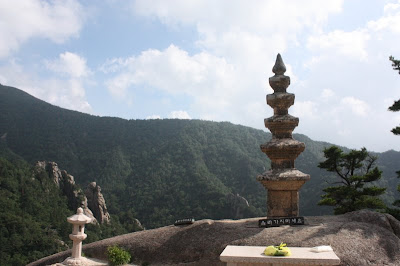 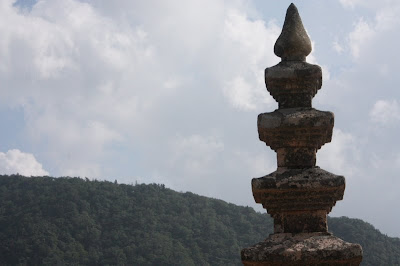 This primal rock is typical of the Seorak mountains. 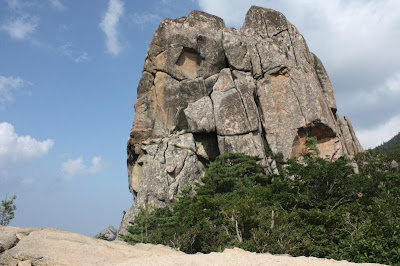 A typical vista of the park. 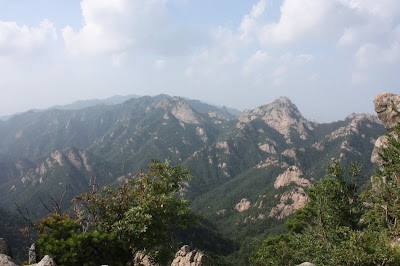 One of the mountain god (san-shin) shrines. The mountain god can be recognized by the tiger that is always by his side. The worship of mountain gods dates back to the days of Korean shamanism. Tigers are now extinct in South Korea, though rumor has it that a few are still alive in the North! 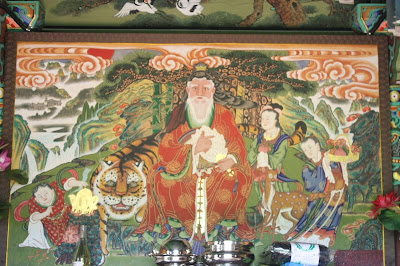 Posted by Almayer at 7:55 PM No comments: